These crackers are perfect for cheesecake crusts, graham cracker crusts, s’mores, or just to have as a snack (excellent with cream cheese).

Homemade graham crackers have a delightful flavor from the molasses or honey — and a unique texture when made with graham flour, but you can make them from whole wheat flour, too.

Running a food YouTube channel, I eat more than should that’s why I started playing around with this classic Japanese cheesecake.

My original video featured three different cheesecakes but ran too long, so I’ve cut them — and this blog post — into three different recipes. Today, the original Japanese Rare Cheesecake with an optional modification to bring the calories way, way down.

Whipped Milk is an under appreciated way to add lift to desserts without all the calories. It’s a blank canvas onto which you can add different flavors that are incorporated into your desserts.

For The Tart Shell

(You’re trying to cream the largest bits into the flour, not every piece, so just one press is enough.)

Pastry is simple, but food stylists, paid professionals, and ideals on what pastry should be have set a high bar on personal expectations zapping creativity and confidence — and the will to try.

The only rule for pastry is that everything be cold, but crusts and shells can also be made from hot melted fat, oil, be moulded from ground cracker crumbs or raw dates.

For any pastry, flour is mixed with fat and liquid. We add fat to the flour to cover the gluten. Just as water and oil do not mix, the fat coats the gluten, keeping the water away. Making less gluten results in tender crusts. Recipes that call for butter also include another fat. This is because butter is 20 water and that extra shorting, oil, lard is to make up for that water to achieve the golden ratio for pastry: 3, 2, 1

People who want to decrease calories often remove some — or all — fat; others add whole grains to improve the nutrition; others add milk, stock, or even vodka for one reason or another. This means you can change the flour, fat and liquid to meet your needs.

This is the formula for standard French pastry.

Tier one (you must use)
2 cups All-Purpose flour (you will add flour throughout the rolling, so precision through grams is unnecessary)
168 grams or 6 oz (unsalted) butter as cold as possible
56 grams, 4 tablespoons shorteing or lard as cold as possible.
Ice water
Up to 1/4 teaspoon salt

Tier three (optional)
Cinnamon or other sweet spices (for sweet crust)
Fine herbs (for savory crust)
Up to 1 teaspoon Vinegar (to weaken gluten)
Up to 1 tablespoon sugar (to brown the crust)
Up to 1/4 baking soda (to brown crust, works with sugar)

Cut the butter into chunks. Put the flour, salt, butter and shortning in a food processor with the S-Blade (pic 1 below) and pulse three times, which feels too short, but only three times. Turn on the machine and add all the water and vinegar all at once. In seconds it will form a ball, or otherwise clump together (pic 2). Stop the machine. To harden the fat and allow the dough to absorb the water, quickly place the dough in a plastic bag (pic 3) and put in the refridgerator for at least an hour or over night — you do not need to handle the dough (pic 4).

Take it out of the refrigerator. Roll it out one last time and fold it into thirds. Congratulations, you’ve made pastry. Cut it in half and freeze or refrigerate it. The next time you roll it out you can make a pie, a tart, a quiche.

Each time you fold cold dough, you create laters of fat. When that fat melts and the steam escapes it creates a flakey crust.

The principle is the same for any dough with hard fat. Each time you dust with flour, fold the dough into thirds and roll it out, you crate layers. As long as the dough is cold the fat stays sold and separate creating a micro layer of fat. However, it if gets warm, the fat melts into the flour. The dough is still good to eat, but it’s no longer flakey. Look carefully at this finished crust. The holes are from those small, thin layers of cold butter. 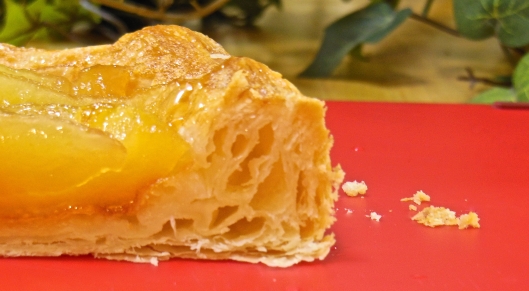 In the next post we’ll roll the dough into pie, tarts, and something very special.